If Anti-Pope the Berg-Bag did what he is accused of, to knowingly cover and reinstate notorious, child molesting (and virtually unpunished) criminal Cardinal Unkl’ Ted, then the Anti-Pope is a criminal as well (what a surprise!)

Acknowledgement of the anti-papacy is on the rise, and influential voices online who represent authentic Catholic peasantry (held in high regard on these peasant pages) are exhorting priests themselves to obey Christ, even if it means walking away from the Chancery. Compliments as well to ChurchMilitant.com. All round can be seen comments that weary but determined Catholics sense a tectonic shift, a weakening of the hold on power by the apostate pansy-prelates of the novus ordo sect. Here and there a priest appears resisting: in one place a Roman collar is photographed at an ad hoc protest of Cardinal Guerl in D.C., and elsewhere a sermon is heard depicting this moment as the one in which the Blessed Virgin cleans house.

Is the House of Gold, in fact, sweeping the decks clear of such hellish clerical refuse? It would be the answer to the prayers of many hearts, but the Seat of Wisdom would also bid us to observe with not only the innocence of lambs, but the serpent’s wiles.

Let’s be mindful that the current crop of red-hatted fops represents generation two of criminally minded homo-apostates -motivated by odium fidei– desirous most of all a life of luxury and respectability, and for whom an office of holy church is the requisite sinecure. Again, to re-emphasize, we are on the cusp of G3 of bishops and cardinals who revere a phony council; (including those who offer the sacrifice of the actual and Catholic mass), who extoll the apostle of the atrocious prayer meeting of Assisi, confidante of Marcel Maciel, canonizer of crypto-Jew & fag Jose Maria Escriva de Balaguer, Super-saint John Paul II; and the vast majority of whom never did a blessed thing to prevent a child from getting orally or anally reamed by their own spiritual sons. Yes, now in our desperation to see the dawn of the Reign of the Immaculate Heart, we are tempted to believe that this excrement encrusted, heretical filth is something that the Blessed Virgin will use to clean house. In faith, She could do exactly this; however, I think she would bid us to be cautious and exercise wisdom in our apprehension of current events, rather than be led by emotional fervor (however genuinely pious such sentiments may be).

The actions of Anti-Pope Berg-Bag are not only detested by Catholics. G2 con-men of the phony council hate him as well, because since day one he has exposed their scam. This confidence racket, the one for which we Catholics in the pews have fallen decade after decade, pits the actual revolutionaries (crypto-Jews & commies, faggots, freemasons) against non-real, conservative opposition. We write the checks, good men are dismissed from the seminary and good priests from the clerical state, and our money pays for the Gollum-like Cupich to rise in the ranks. Then, with the revolutionaries hollowing out every corner of divine worship, doctrine, and good governance, we are presented with conservative heroes who issue muted objections and regrets at the goings-on. Meanwhile, the insatiably lustful, smoldering sodomites have been sent into our parishes to bugger our teenage sons.

Hush-money, slander, and a Jew-run media has kept the victims from being heard (until disclosure becomes good for the Jews). While this scam was going very smoothly for these men, they (just like history’s Jewish revolutionaries) overreached. Taking a shot at the nature of the papacy, someone convinced Pope Benedict XVI that he could bifurcate the office and share it with a pre-selected, Christ-hating ideologue. Enter Anti-Pope the Berg-Bag. Enter who am I to judge? Enter Catholics are ingesters of excrement (Jews are known for harboring and publicizing such abominable perversions). Enter McElroy, Tobin and Cupich’s red hat. Enter the cover-up artist for the known molester. Enter the criminal. This selected revolutionary, who was to place the capstone on the work of the phony council, who was to send the Church Herself to the guillotine, simply went renegade. Now, with five years off the leash and Catholics pulling their money, the con-men need to get rid of the monster and try to get us, whom they think stupid, to buy back into the swindle. The scions of the phony council want us to believe that they are not apostate criminals anymore, and that once the Berg-Bag is excised, like the removal of a septic organ, the evil will have been purged, and Catholics may return to the novus ordo racket. Poppycock! Horse-puckey! 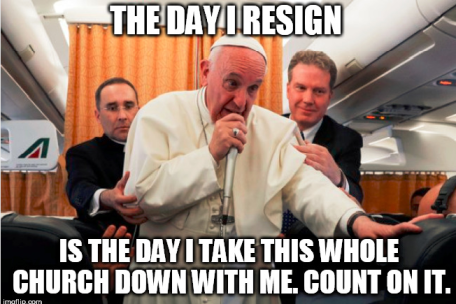 Hence the reasoning for transforming their South American champion of the revolution into the scape-goat for their own crimes, still in progress: they need to blame someone (anyone but themselves) for that which they can no longer deny. Thus, we could very well be looking at the desperate groping of the subversives to maintain their hold on power. If such speculation is in any way true, skepticism ought be the watchword.

The desperate revolutionaries could be trying to set up yet another illegal conclave, and while Benedict XVI reigns, as he in fact has since 2005, would simply replace one anti-pope with another. Don’t fall for it! This is why any existing call to end the Berg-Bag’s junta which does not have at its foundation the defective abdication of Pope Benedict XVI, is not only doomed to fail but also could be controlled opposition. Gatekeepers will take the angle that now things are really happening! In a sense this angle will be true, but not in the manner after which Catholics so fervently hope. Pope Benedict XVI spawned the Berg-Bag with his hare-brained attempt to abdicate, while at the same time trying to keep his forever yes. The final score: principal of non-contradiction 1, attempt to abdicate while not abdicating: 0.

Will they murder the Pope? They may try, but success can only be achieved if God permits it. How would we know? Just like the brethren who were nauseated at the first site of the Berg-Bag on the balcony in his larping pope costume, we’ll know. Also, because there are solid Catholic minds who believe a sitting pope to be the restrainer of anti-christ, anti-christ precursors and similarly malevolent forces awaiting to be unleashed upon the face of the earth. If the synagogue surges forth via its Islamic, communist, or cultural revolutionary proxies, and the Zionist trumpets himself as restorer to order, we’ll know. Nevertheless, the lavender mafia’s desired result will be to install a proper revolutionary con-man as anti-pope. -And if they murder a sitting Pope to get their way, an anti-pope that one will be.

The launch of a trial balloon being floated with intent to bag the Berg-Bag was suspected, and of which was made mention on these pages in March of 2017. In it are details and explanations highly relevant to the present, and a read-through will supplement understanding of points made herein. At that time, however, the secular forces traveled a different orbit, preoccupied with their selection for the sham masonic office of POTUS, and whipping up the flames pitting leftist ideologues against happy yet ever hapless political conservatives of the U.S.

Now, however, the paranoia of Israeli firsters controlling the U.S. government and political scene at all levels rises rapidly. Their own trial balloons to condition the public to satanism, cannibalism and child-rape is met with a gentile reaction rippling with overtones of physical force beyond the ken of any Jew-infiltrated controlled opposition movement. This reaction has the Jew-run media in a panic, because rising numbers of formerly docile goyim (such as your writer) are looking into exactly what Orthodox Rabbis and their Christ-hating ancestors have been up to for the past 1,985 years. That’s a problem for them, because the granddaddy of modern swindle, slander and slaughter could be jeopardized: the dogma of the holocaust religion, which prevents all criticism or the merest mention of the Talmud’s doctrinal permission for the rape of both little boys and girls. Beyond that are centuries of documented ritual murder and blood-drinking of young Christians. So the Tribe has very strong incentives to keep the goys fighting, blaming, hating and killing each other; throwing the novus ordo prelates in front of Jew-led attorneys general and their criminal indictments also presents the lavender mafia with their desired opportunity to burst the pus-laden Berg-Bag, and get back to their much coveted sodomizing under silk sheets.

Leopards don’t change their stripes. Neither do predatory, Christ-hating infiltrators fall in love with Him while grasping to hold onto a life of luxury and lust. Priests are encouraged to explicitly beg their Divine Master as to whether they remain under the control of Bishop Ben Dover and Monsignor Andre Molestro. No answers are presumed: the King and His Paraclete prefer to speak to your ears first, and He may have purpose for you to remain captive. If not, don’t be caught off guard if you see the villains attempting a coup to save the revolution. But neither under such circumstances ought you despair. We’re attempting to spread the word ahead of such a contingency. Catholics, provide materially for your spiritual fathers who, asking so little, deliver such a priceless gem: the promise of eternal bliss.